Women's suffrage is the act of extending the right to vote to include women. This term is exclusionary in that it doesn't consider people of non-binary gender or transgender people, as well as ignoring the impact of race, class, or sexuality. This is largely due to the fact that suffrage, though an ongoing issue in many heavily oppressive countries outside the West, is a historical issue within the West, although even there some nations didn't extend women's suffrage until a time within living memory. 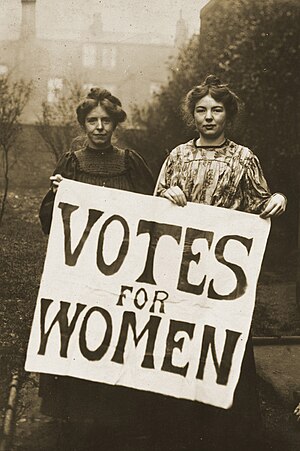 Women began winning suffrage in the 19th century, with limited or arguable examples occurring in the 18th as well. In the 18th century, women's suffrage tended to be temporary or anomalous. Women had suffrage in Sweden during the Age of Liberty, for example, which lasted from 1718-1771. Women could occasionally vote in American colonies, but only if they were unmarried and owned property (which also meant not having a son over the age of majority). Women's suffrage didn't form part of the American Revolution, although Abigail Adams did urge her husband to "remember the ladies" in the new government.[1] The first call for women's suffrage came during the 18th century French Revolution, though unsuccessfully.

Women's rights, and feminism, were more broadly conceived when Elizabeth Cady Stanton and Lucretia Mott were denied equal participation in the abolition movement, being denied seats at the World Anti-Slavery Convention in London, 1840. The Seneca Falls Convention was held over several days in Seneca Falls, New York, in the summer of 1848 and was the first women's rights convention. Its Declaration of Sentiments included a point, added independently by Stanton, regarding men depriving women of "the elective franchise, thereby leaving her without representation in the halls of legislation".[2] Susan B. Anthony joined the movement in 1851, and called for women's suffrage from within the Labor movement, although men in the movement expurgated her efforts.[3] In the United States, suffrage first occurred on a limited basis, in western states and territories in the 19th century. Women later gained full suffrage through the 19th amendment in 1920.[4]

Suffrage elsewhere came piecemeal, also at the local and national level. It was sometimes only local, as with the self-governing Isle of Man, a dependent territory of the British Crown, in 1881, or temporary, with nations or colonies falling under other government and women losing the franchise in that way, as with the Paris Commune in the 1870s. The first independent, still extant nation to grant women's suffrage was New Zealand, in 1893. The most recent nation to grant suffrage was the United Arab Emirates in 2006, with limited suffrage for both women and men, or Oman, with full suffrage in 2003.

A political cartoon commenting on the disparity between women's rights in 1930 in Québec versus Turkey: the women of Québec gained the vote 10 years later.[5]

Even in locations with so-called universal suffrage, the right to vote is still limited by reason of age, citizenship, and occasionally mental capacity or criminal convictions. Historically, suffrage hasn't been limited solely by these factors and gender, but also by race, class, or wealth. Denying women suffrage arises from patriarchy, often combined with religion and class concepts.

For example, in the United States, suffrage was for a long time limited to land-owning males (de facto or de jure often, but not necessarily, white), thus limiting suffrage based on race, gender, and class. Prior to the adoption of the Constitution, suffrage was also often limited by religion, as non-Christians and members of the "wrong" sect of Christianity were excluded from suffrage. The theoretical framework at the time saw the vote thus being given not to individuals, but to households, with the head of the household (the father, master, owner of the property) exercising his vote in such a fashion as to not only look after not only his own interests, but those of his wife, children, and servants. This of course falsely assumes both that the land-owner actually cares about those others' interests, and that they are perfectly free to leave his household and enter another if he doesn't. In short, the basic unit of society was then understood to be the family rather than the individual, a worldview still held by conservative groups today.[6]

The status of women in the Islamic world is complex and in constant flux. In some Islamist states, women face the worst kind of oppression, as was the case in Taliban-controlled Afghanistan. By contrast, Iran, also an Islamist state, women have suffrage, can serve in parliament, and make up 60% of the nation's university students. The Koran in particular and Islam in general are unequivocally patriarchal, as is the case with the other Abrahamic religions, and progress is difficult.